In the purest sense, espresso coffee is made from 7 grams of finely ground coffee extracted to 1.5 fluid ounces (44 ml) over about 25 seconds.

Espresso is usually topped with a golden creamy color (called the crema).

Typically each barista and coffee shop have their own particular styles, coffee blends, machines, and even filter basket sizes.

The USDA value for Espresso coffee is 64 mg caffeine per fluid ounce.

UPDATE: Analysis of 97 different Espresso drinks in Queensland, Australia found a much higher value of 106mg per serve. The range varied enormously (25mg to 214mg). Source: Journal of Food and Chemical Toxicology.

Other popular drinks such as a cappuccino, caffe latte (or latté), caffe mocha (or mochaccino) are based on one or two shots of espresso.

Some countries refer to a shot of espresso as a "short black". Australia and New Zealand typically serve an additional drink called a flat white - similar to a cappuccino but using only steamed milk and some micro foam rather than fluffy foamed milk on top.

Where To Buy Espresso Shot 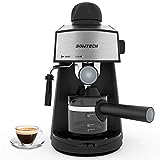 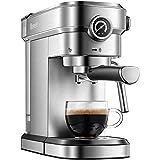 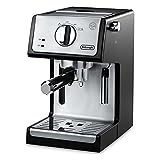 Compare sugar levels of other drinks

Caffeine During Pregnancy: How Much is Safe?